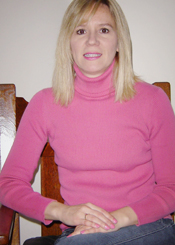 Ronica Stromberg is the author of five children’s books: two published and three under contract. The Time-for-bed Angel, a picture book, came out in 2008, published by Lion-Hudson of England. The book follows the humorous adventures of a guardian angel watching over a rambunctious, bedtime-avoiding boy. Ronica reads the story in day cares, preschools, and early education classrooms during story time or before naps. Her mystery for 10- to 14-year-olds, The Glass Inheritance, came out in 2001, published by Royal Fireworks Press of New York. (Royal Fireworks has also contracted for three teen novels.) The mystery reinforces fifth-grade history curricula with a plot that involves the Great Depression, World War II, and Depression-era glassware. Ronica’s stories appear in 18 anthologies, such as Chicken Soup for the Teen Soul on Love and Friendship, and in numerous magazines and newspapers.

She enjoys serving on panels of writers, taking part in question-and-answer sessions, and speaking and reading to individual classrooms. She has written for pay as far back as eighth grade and has kept diaries from the eighth grade on. She tries to pass on this love of writing and journaling to children.

The Time-for-bed Angel
“The Time-for-Bed Angel” is the humorous story of a rambunctious, bedtime-avoiding boy and the guardian angel who watches over him. The publisher of the book is Lion-Hudson, the United Kingdom’s largest independent publisher of inspirational books.
Buy from a local bookstore or online from Amazon